You are here: Home » Latest News » All About Space!! 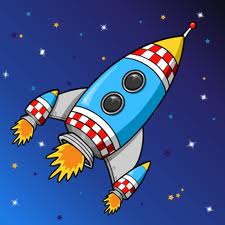 Third class have been very busy since we came back after Christmas – our first stop, SPACE!! We learned all about space including planets, stars and galaxies.  Our detectives realised that a lot of chocolate names came from space – we all love Milky Way bars, Mars bars and Galaxy bars!!

We then learned some of the history of space travel including who were the first people on the moon.  Did you know that a man named Michael Collins was left orbiting the moon while Neil Armstrong and Buzz Aldrin set foot on it??! We also wrote newspaper articles in English, based in the future, about the first person to land on Mars and we published these in a class newspaper – it’s the most popular book in our library!

Finally, we made rockets in Science which we brought out to the yard to blast off.  We used film cannisters, a fizzy tablet (eg: Alka Seltzer, Borocca, Vitamin C, etc) and a little bit of water.  We then stood back to watch our rockets shoot up into the air!! Here are some pictures of us experimenting with our rockets: